Coinmarketcap has listed Bitcoin’s smallest unit known as SatoshiOne Satoshi(SATS) is the equivalent of 0.00000001 BTCMike Novogratz believes it is time to switch to Satoshi (SATS) as the price of Bitcoin looks ‘too expensive’ for some investorsAccording to Glassnode, sat stackers or holders of less than 1 BTC, now own 5.25% of Bitcoin’s circulating supply

It Might Be Time to Switch to Satoshi – Mike Novogratz

The idea of introducing the smallest unit of Bitcoin to BTC traders and investors was suggested by the CEO of Galaxy Digital, Mike Novogratz, earlier today.

According to Mr. Novogratz, too many people see Bitcoin as being too expensive and a switch to its lowest denomination would remove the idea that BTC is out of reach for the regular investor.

At the current value of $0.0005845, one Satoshi paints a picture of an affordable Bitcoin since 1 SATS is lower than a dollar. The same $1 can net investors roughly 1,710 Satoshi (SATS).

Mr. Novogratz went on to challenge the CEOs of Binance, Coinbase, FTX and Coinbase, by asking whom amongst them would be the first to list Satoshi (SATS) for trading.

His idea of switching to Satoshi can be found in the tweet below.

It is time to switch to Satoshis. Too many people telling me at $58,000 $BTC too expensive. Which exchange will be first to quote in SATS? @cz_binance @brian_armstrong @SBF_Alameda @tyler

According to a recent analysis by the team at Glassnode,  investors holding less than 1 Bitcoin, have been staking sats from early 2018 to date. This category of investors now owns 5.25% of Bitcoin’s circulating supply as explained in the statement below and accompanying chart.

Bitcoin accumulation by ‘sat stackers’ has continued slow, steady and uninterrupted for many years. Addresses holding less than 1BTC now own 5.25% of the circulating $BTC supply.

So far we’ve not seen a FOMO impulse like 2017 blow-off top. 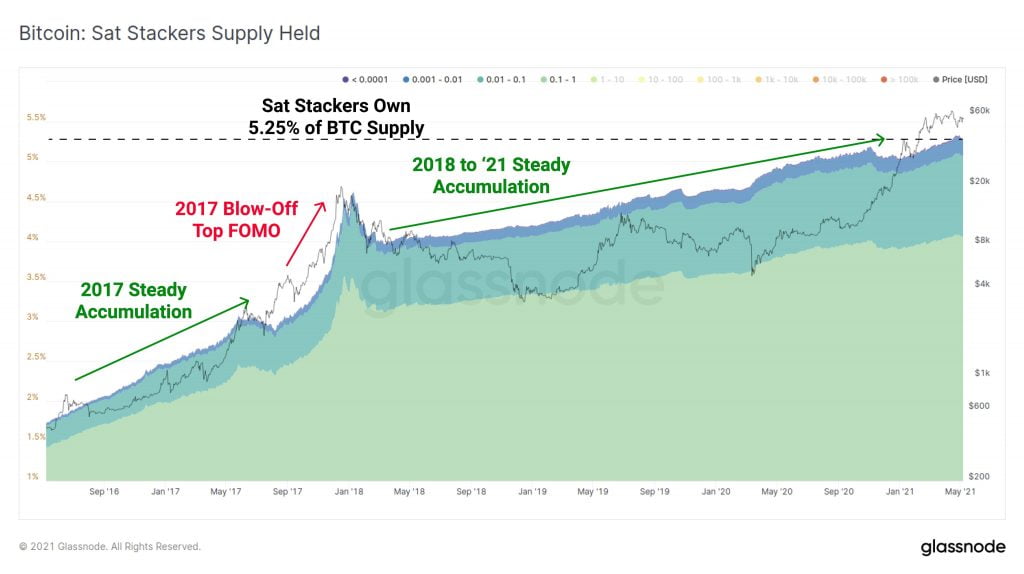